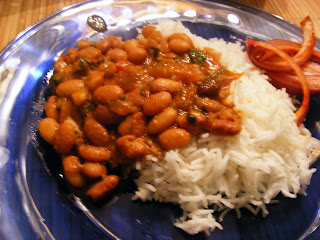 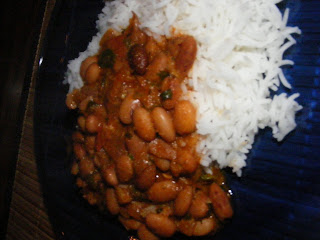 Kidney beans and other beans such as pinto beans, navy beans and black beans are known scientifically as Phaseolus vulgaris. They are referred to as “common beans” probably owing to the fact that they all derived from a common bean ancestor that originated in Peru.

They spread throughout South and Central America as a result of migrating Indian traders who brought kidney beans with them from Peru. Beans were introduced into Europe in the 15th century by Spanish explorers returning from their voyages to the New World.

Subsequently, Spanish and Portuguese traders introduced kidney beans into Africa and Asia. As beans are a very inexpensive form of good protein, they have become popular in many cultures throughout the world. Today, the largest commercial producers of dried common beans are India, China, Indonesia, Brazil and the United States.

I usually make Rajma with kidney beans, but a raid into the pantry and I found out that I had none of those kidney shaped cute looking red colored beans. The weather was rainy and pitter patter. It called out loud to me.. Make some Rajma Chawal!

So I looked again, and I found them Pinto beans, hiding in a corner. I thought lets bring them on today. The result was not bad at all. It was meaty and nutty and just like Rajma with kidney beans.

I know I need to type away the recipe now:

This site uses Akismet to reduce spam. Learn how your comment data is processed.

Welcome to Spiceroots. I am Ansh - the cook, baker and wine enthusiast behind this blog. Thank you for joining me on an adventure to make everyday meals delicious!